Major Bedhead Presents, For Your Edification:

Grammar Rules for the Unenlightened; Or, How to Write Good

Don't use a big word where a diminutive one will suffice.

Stamp out and eliminate redundancy.

All generalizations are bad.

Take care that your verb and subject is in agreement.

A preposition is a bad thing to end a sentence with.

You should never use the second person.

The passive voice should never be used.

Never go off on tangents, which are lines that intersect a curve at only one point and were discovered by Euclid, who lived in the sixth century, which was an era dominated by the Goths, who lived in what we now know as Poland...

As Ralph Waldo Emerson once said, "I hate quotations."

Excessive use of exclamation points can be disastrous!!!!!

Avoid tumbling off the cliff of triteness into the black abyss of overused metaphors.

Keep your ear to the grindstone, your nose to the ground, take the bull by the horns of dilemma, and stop mixing your metaphors.

This sentence no verb. 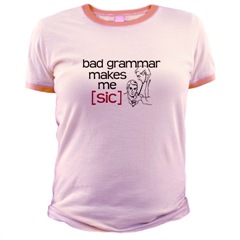 Posted by Major Bedhead at 7:30 AM

I love that t-shirt. Do they ship to CAnada?

beaniebaby - the website is www.onehorseshy.com I can't see why they wouldn't.

What an extraordinarily edifying entry!!!!

dgb - no, but grammar/punctuation/word usage books are my weakness. It's a sickness.

Reading this entry was so fun!!!!

(off to order that t-shirt for Pili. And maybe for me. And my mom.)

I want to make sure you know about Language Log. http://itre.cis.upenn.edu/~myl/languagelog/

Ok now I am very paranoid of anyone reading my blog.

I love that post. Can I use that for my Moms Group forum?

I have been looking for a nice way to tell people that a whole paragrah that has one sentence isnt an easy read.

I have always been paranoid. lol