I dinnae think she can take much more, Cap'n!

Since I now have to get up at what-the-fuck o’clock every weekday morning, it’s made me a little cranky. And before you start laughing hysterically, I’m quite aware that this is my usual state of mind. I am, however, even MORE cranky than usual.

In honour of my born-again cranky-hood, I give to you: Rant In B Minor.

Who thought it would be a good idea to name a trucking company A. Duie Pyle? Seriously. It’s emblazoned across the back sides of tractor trailers all across New England. And I am NOT the only one who thinks of a big, steaming pile of poo every time I see one of those trucks, because I’ve asked. This is one time when I can’t be accused of channeling an eight year-old boy. 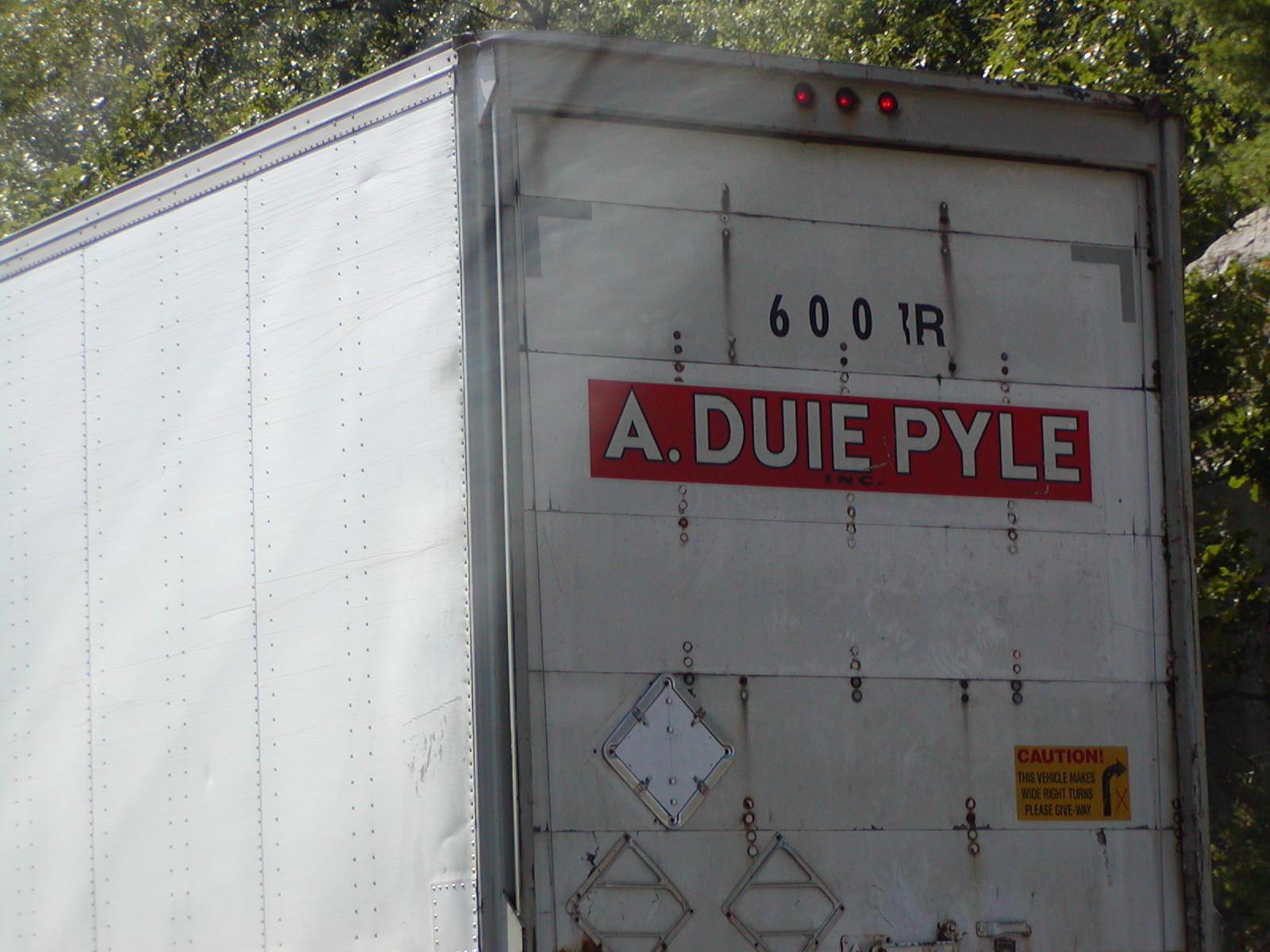 I am cat-sitting my mother’s cat while she’s off in Italy for a month – must be nice. Bi-atch. Black cat with an infintessimal white spot on his face. Named Punto. Why? Because instead of just calling him Spot and going for the more obvious humour, she has to name him Spot in Spanish, thus ensuring everyone and their little brother ask her about the cat’s name. I am about to call him DEAD, though, because he’s taken to dragging large sections of newspaper under my dresser every night and then kneading them. All. Night. Long. Crackle-rustle-crackle-rustle. Which makes the Dumbest Dog In The Universe come to investigate. Which makes the cat growl and spit and then knead harder. Which wakes me up at LEAST three times and when you have to get up at what-the-fuck o’clock, it makes you a bit crabby.

After a 15-1/2 month struggle, we have been able to get The Boo to sleep in her crib without a peep or a fuss, which, let me tell you, was ALMOST enough to convince me that there may actually be some sort of higher power. Now, however, she has an ear infection in each ear. Again. Which means that she won’t stay asleep in her crib for more than about 30 minutes. Which means she’s been sleeping in our bed for the last two nights. Now, I love The Boo. She’s cute and funny and all those other yummy baby things. She’s also a friggin’ windmill in her sleep. I am sick of having toes in my back, my boobs, my hair…it’s getting old. Tonight, she’s going back into the crib, because I am NOT having her get used to this all over again. I want my bed back.

I got to work this morning and there was a TWIG in my bra. I don't hang my laundry out on the line (not having a line to hang it from), so how it got there shall remain one of life's little mysteries. Probably explains why my boob was so itchy while I was driving to work.

I just want to be DONE unpacking. I’m sick of tripping over boxes. We have two washers and two dryers in the kitchen, too, which makes for tight quarters. Why, you ask? Because TCBIM had to have the garage turned into a den. Immediately, apparently. So, I have no garage any more, which means I have to place no store the spare washer and dryer. Anyone want to buy them? I’m sick of looking at them.

The final enrage o' the day: The fuckers over there on Yawkey Way have TRADED Bronson Arroyo for Wily (put the second L in there, for the love of Pete) Mo Pena. (and no, there’s no tilda over the N. I checked.) Why? Why? I love Bronson. He's a great pitcher and was a great team player, willing to do anything to stay with the Red Sox. After giving them the hometown discount, I’d be willing to bet he’s seven shades of pissed off. Welcome to my world, Bronson.

Posted by Major Bedhead at 7:51 AM

oooh sleep deprovation! i'm so sorry. i've resorted to tylenol pm for my last trimester of pregnancy and now i wake up with a miserable hang over that my family pays for until i finish my first cup of coffee. yuck. i don't know which would be worse- probably no sleep. sorry, julia.

First, the truck's name reminds me of a Pyle of poo too!

Next I can relate to the human windmill...which reminds me everytime to cut finger and toe nails.

I hope you get a good night's sleep soon. It's the early morning sun has my household waking at what-the-fuck time.

ok, so I jump over to comments to leave an encouraging note

my 'word verification' code pops up as: pmess

now, I know you're not actually PMSing, but I'm taking this as a cue to leave quietly... ;)

oh boy Julia.....I cam empathise with the wtf o'clock...since moving and having to stay with my parents and because my sister and her family is there as well there is no bedroom for me so I have been delegated to the lounge room so everyone else dictates what time I go to bed and then also what time I get up...there is Mum who leaves for work at 4am and them my Dad who is leaving at 5am and then my brother-in-law who leaves at 6am who all think they need to stop in and say good morning to me...and then my neice will come in at some other time and go breaky Auntie Carolyn? and if I say go and see your mummy she drags in the box of cereal and her bowl to the lounge room and bangs me on the head with the bowl and smiles and goes breaky Auntie Carolyn?

Tough times for Boston, yet again. So much betrayal. Damn that prick Damon. And now they've packed up Arroyo (who I liked and thought had a lot of potential). Next they'll be saying that Veritek has knee problems and needs to take the first half of the season off. Or that Trot is already injured.

I can't sleep at night.

I'm glad someone agrees with me. People keep saying "Pena is good. We can use him." Of course we could, but why get rid of Arroyo? Schill has a crap ankle and will just collect his paycheck until he's done playing. Wells? He's, what? 42? Ancient, by baseball standards. The new guy has spent a LOT of time on the DL and Wake had a shitty ERA last year when Mirabelli didn't catch him. Since 'belli is gone, I'm thinking there's going to be a big adjustment period for Wake. So...why do we want to get rid of a guy who's young, healthy and a good pitcher? I don't get it.

LOL - I think about that EVERY time I see one of those trucks. Seriously - who thought of that? And were they trying to be funny?

And you know I can relate to your sleep situation... The other night I woke up sleeping on my back with a dead weight on my legs. Thinking it was the dog, I start telling her to move. Something brown and fuzzy shifts by my HEAD so I look down at my legs and Hannah is sleeping ON TOP of them?!

Hope the unpacking gets done fast and those ear infections go away soon too. :-)

Oh my God. You are just too funny!!

Punta is an extremely easy word to mispronounce.

a duie pyle is the the name of the company founder. my father works for them. but yeah its pretty funny

I named my Boxer A.Duie Pyle! We saw a truck on the PA Turnpike when we were bringing the puppy home and didn't have a name picked yet. I said "how bout Duie?"
it fits, don't you think?