Born On The Fourth Of July

Today is my son's 18th birthday.

We're going to his birthday party today, where he will tell me that he's getting a tattoo. He's expecting me to flip out over this, but since I'm planning on getting a tattoo, I won't. In fact, I will give him money towards said tattoo.

There will be water balloon fights and volleyball games and lots and lots of food. Some people will have too much to drink (not me). Some people will get sunburned (again, not me). There will probably be an argument between some members of his dad's side of the family (it's an annual tradition). And later, the drunk people will set off fireworks. I plan to be long gone by then. I like my fingers and toes and hearing intact.

It's strange when I think about the last 18 years. Before he was born, I wasn't even sure if I wanted to keep him. I was talking with a counsellor about giving him up for adoption. But then he came into the world and I just couldn't do it.

He was a cute baby and he's a handsome kid today. I think I made the right decision. I hope I did. Sometimes I wonder - we don't seem to get along that well these days, but I don't know how much of that is difficulties between us and how much is that he's a typical, self-centered 18 year-old. I think it's mainly the latter - he's all wrapped up in his friends and his job. Plus he lives with his dad, about an hour away from here. It's a little weird. I miss him a lot. 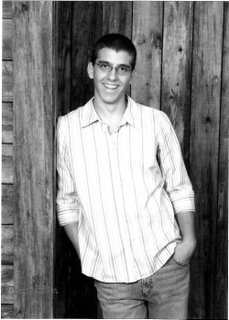 Posted by Major Bedhead at 9:57 AM

He has your smile!

You're right - he IS a good looking kid! Hope he has a wonderful day - and happy 4th of July to you, too!

He totally has your eyes too.

He looks mature for his age.

I believe it is the normal self-centered teen thing. I REALLY believe this. (having a 16 yr old of my own)

He is a handsome kid.

He is handsome, and confident looking. Will he be a senior this year, off to college or taking a year off? He'll always have his birthday off and will have a huge party to attend. That's lucky.

I don't know many parents who get along with the teen age children. Even early 20's is tough. And kids today are younger somehow than we were; but think they are so worldly and wise. They are babies!

Joke - AMHIK? I'm starting to loathe those abbreviation things. They make me feel like a moron.

Vickee - He got accepted to a college, but the financial aid isn't there and at $35,000 a year, it's way beyond us. So he may be taking a year off or may be going to a state college for a year. It's still up in the air.

My daughter will be 15 on Froday and she wants her nosed pierced, I am going to let her. She also thought I would flip out...lol!!

We have a lot in common, I too was going to give her up.

He is a nice looking young man, be proud very proud!!!

What a good-looking kid!

Hope he had a terrific 18th birthday.

And Julia, hang in there-- it might take a while, but he'll come around.

P.S. Are you sure you've explored all the Fin. Aid options? All you have to do is say the word and I'll pull up all the research TFBIM did for a client of hers.

I would love to see the stuff TFBYM did. That would be fantastic.

He is very handsome. And you two should go and get tattooed together. :)

Aren't we all hideous when we're 18? Isn't there a law or something?

1- I know because I'm in the eyeglass wearer guild.

2- I'll dredge it up over the weekend and sling it along.

PS...I always remember it's Alex's b-day on July 4....I remember you finding me in "Deliverence Country" (Pittsfield) and telling me that you had a baby boy! Glad we are still in touch!