Say It Ain't So, Johnny (you rat-bastard) 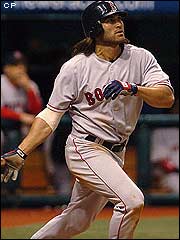 Ok, so how pissed off am I? Johnny Damon, our signature player, our lead-off hitter, the FACE of the Boston Red Sox, just went and signed with the fucking YANKEES! The BASTARD! The team he swore he'd never play for.
From Wednesday's NY Times:

Last May, he professed his devotion to the Red Sox, or at least his distaste of the Yankees.

"There's no way I can go play for the Yankees, but I know they're going to come after me hard," he told mlb.com then. "It's definitely not the most important thing to go out there for the top dollar, which the Yankees are going to offer me. It's not what I need."

Guess if you wave enough money under his nose, he becomes a whore like all the other baseball players.

So, management let Theo walk away. They didn't make a play for Bill Mueller, who is, like, Brookes Robinson good at third base. They let Kevin Millar go. They traded Doug Mirabelli. Who's left from the 2004 championship series? Veritek, Trot Nixon, David Ortiz and Manny. And Manny wants to go, claims he won't show up at spring training if they keep him. Maybe Manny's on to something. Leave before the ship goes down, before the team completely implodes.

I'm so pissed I can't even see straight. My husband is being far too philosophical for me right now. Whatever, he had a lousy throwing arm and he's 32, but the fucking YANKEES? It's like a knife in the heart.
Posted by Major Bedhead at 10:41 AM

This is a shockah, eh?

Have you read Damon's book? It's so bad it's laughable.

Julia, both my mother and I are in a state of mourning.

Couple this with the fact that my loving, supportive, handsome as hell boyfriend is a (gasp) Yankees fan. We share a bed but not a team.

It's a sad day here in Mudville.

Kassie - no, I haven't read the book and probably won't, now. The bastid.

Y'know what sucks? I bought my son a Damon t-shirt for Christmas. He'd better take a big fat black marker and draw a line thru the name and number now or I'll kill him.

I bought my mom a Damon t-shirt last year. I'm sure she'll be torching it in a bonfire this weekend.

And yes, I have fallen hard for a Yankees fan. But isn't the mantra, "We like someone because, we love someone despite" ??

It's a good thing I read so many nice things about him before I found this out, though, otherwise I'd have to wonder about your sanity. ;-)

So Johnny...you really are an idiot!!

hahahahaha, they all SEE THE LIGHT...eventually

sorry lol i had to lol