No Turkey Died For Me 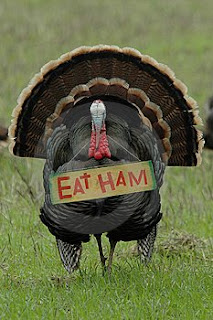 Shamelessly stolen from Her Bad Mother.

I can't eat turkey. It gives me a migraine. Every year, I have all the other stuff - not that I'm complaining, because, really, who complains over having to eat more mashed potatoes, more stuffing and more cranberry sauce? Not me, that's for damned skippy.

This year, though, is different. This year, we didn't go anywhere for Thanksgiving. This year, I had to drive That Canadian Boy I Married to the airport for a 6 a.m. flight. I got up at 3:45 a.m., people. Three-forty-fucking-five.

This year, I'm roasting a chicken, thanks to Joke's recipe, or what I can remember of it, having lost the original in a move, I made a pumpkin pie, I mashed potatoes, I'm making carrots with cranberries and some stuffing. I got to watch the entire Macy's Day Parade (is it only me that calls it that? Because I swear that's what it was called when I was a kid) and tonight I'll have the television all to myself. Note: There will be no football.

And then tomorrow, I get to be at Big Box Store for 5:45 in the freakin' morning, to deal with all the lunatics who will run thru the place like Visigoths on speed.

I'll just keep singing this, though. Because this? Was the highlight of my morning.

Posted by Major Bedhead at 3:17 PM

No turkey was murdered for me, either. It gives me a headache, also.

No complaints stuffing myself on stuffing, though!

I hope you survive tomorrow. Yuck.

I wish you well at work tomorrow! I sure as hell not have any crazy shoppers! I'm not taking any shit tomorrow!!
It will ALWAYS BE THE MACY'S DAY PARADE!! I don't care what anyone else calls it!! Ha!!

Sorry, football all day had made me a bit (lot) crazy!!

Happy Chicken Day!
OMG, I watched the Rick Astley part too! I was a giddy high school girl all over again! Then when the announcer said performing his Rick Rolling, I said to my husband "I learned about that on a blog!" Too which he looked at me in a way that made me realize how pathetic I was to be so excited over that. *sigh* Oh well, I loved it!

I think it's so sad that I know the words of that song, still! LOL And what's worse I was mouthing along! Good god I'm old!
Good luck at work today. Just laugh at all the spending dumbies! They don't know the real meaning of Christmas! (I'm not alluding to a religious meaning either)

OK played the video for my wife (and 80's music nut) and she was dancing in her seat. Where did this guy go?