I was supposed to write about diabetes yesterday, but I didn't. I didn't because I'm tired. I'm tired of thinking about it, I'm tired of logging, of checking, of changing pump sites, of counting carbs. It's very selfish of me. I have no excuses or reasons, it's just there, a big lump of selfish. I feel like the World's Worst Mother when I get like this.

I was at Faces, in Northampton, over the weekend and I bought a keychain that plays the final out of the 2004 World Series. Joe Castiglione saying "...and the Boston Red Sox are World Champions, for the first time in 86 years, the Boston Red Sox have won the World Championship, can you believe it?" And it's like it happened last night. I get chills, I get this stupid, shit-eating grin on my face and I think "How many days til pitchers and catchers report?"

My ex is being a dick again. I'm not going to get into it here, but he is a thorn in my side. I need to put his name in the freezer.

I had to get a new stove because mine died. It was probably older than I am, but it realy frosts my butt to have to buy an appliance in a rush. I wanted a nice stove, a cool stove, but no, I got a boring, white Hotpoint thing. Four burners and an oven. What I really wanted was one of these babies:

What I got was this yawnfest: 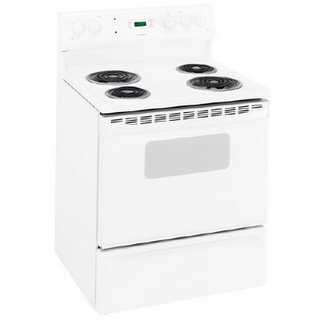 I tell myself that if I had stove A, I'd be able to cook like Julia Child. Hey, a girl can dream, right? Besides, I have a bad case of kitchen lust. Mine looks like a set for That 70s Show. Baby shit yellow and brown. Looooooovely.

They just opened an IKEA near me. I cannot wait to pay that place a visit. It's a good thing I don't have credit cards.
Posted by Major Bedhead at 12:32 PM

You live near Boston, right? I'm about an hour away from Boston. My reason for asking is: WHERE IS THIS IKEA? People talk about this place like it's the Holy Land, and I have to experience it for myself.

Dangerous thing is, I DO have credit cards. And I have no fear about using them.

The logging, the checking, the set changes, yeah all of it-- I get tired of it too.

You are not the "World's Worst Mother."

You're just human, that's all.

When we lived in Chicago, we'd drive to the IKEA out in Schaumburg. Very, very cool-- not a "yawnfest" in sight.

Kerri - It's in Stoughton, which is near Sharon and Holbrook and Randolph. South Shore, near the Cape, kind of. A veritable hop, skip and jump from you.

mmm... ikea. it's not unusual for us to drive the 3.5 hours to the ikea in seattle. we always have to make sure that we have a few hundred dollars that we've saved just for the trip though. we'll go with nothing in particular in mind to buy and we'll still spend every penny. ridiculous. we're junkies.

i feel your stove pain. i LOVE the first one and would feel the same way.