If you can look at a dog and not feel vicarious excitement and affection, you must be a cat.* 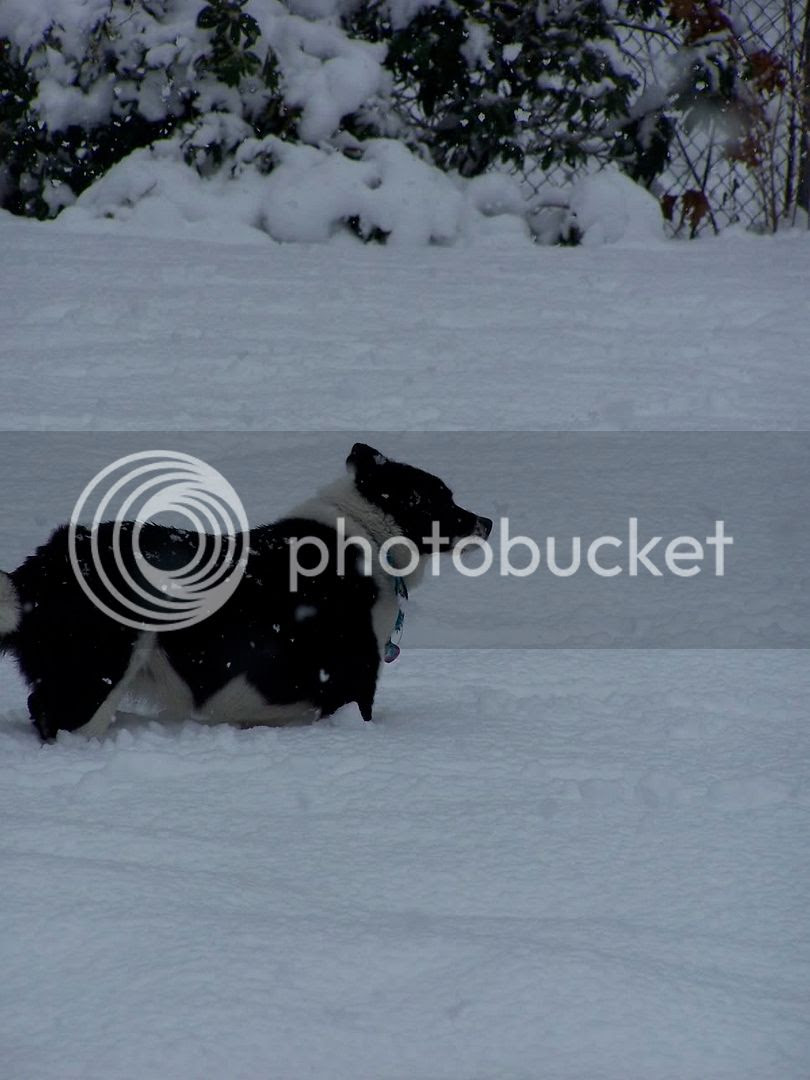 I am not a Dog Person. I like dogs in the abstract. I like the idea of dogs, the picture of them lounging at your feet, warming them on cold nights, of taking them on long walks and watching them frolic with the children. But that's the idealized picture of dogs.


The reality of dogs is that are a lot of work and good grief, are they needy. They need to go out, they need to come in, they need to be fed, walked, petted, played with. And I already have two toddlers and a teen-ager with a chronic illness (and let's not discuss That Canadian Boy I Married - he's the neediest of them all). I've got needy coming out of my ears.

But we do have a dog and I do like her. 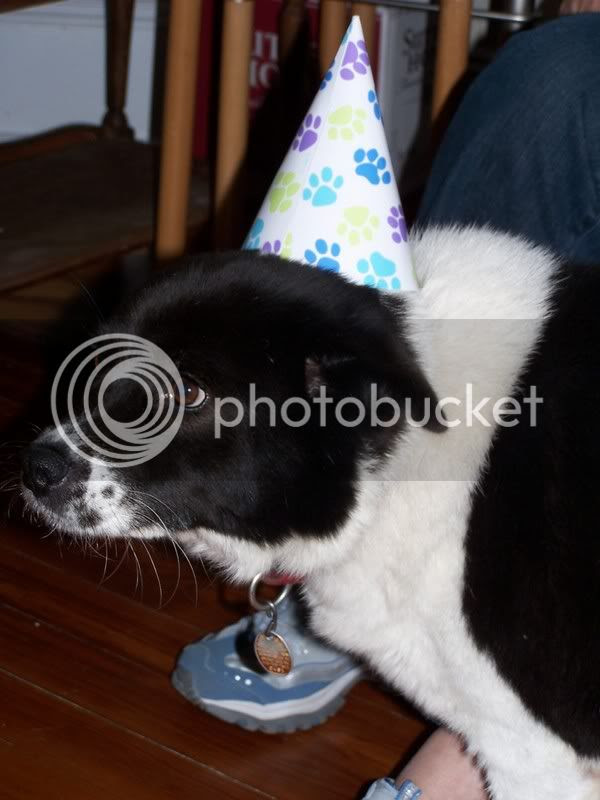 Yeah, maybe you could leave off the party hat next
time, ok? A little dignity would be nice, lady.

I don't feel overwhelmingly in love with the dog, although I did go thru paroxysms of worry when she bolted two years ago. So, yes, I like her. I feed her. I put flea goop on her. I vacuum up the metric ton of hair she sheds every day. I take her for walks and I rub her belly. And when she dies, as she inevitably will, I will be sad but not devastated. Like I said, I like dogs, I'm just not a Dog Person.

All that said, we have new neighbours and the neighbours have two dogs. One is one of those itty bitty things that looks like a football with fur. A handle-less dust mop. More of a toy than a dog. And their other dog seems to be some sort of golden lab mix. The toy mop dog gets walked and kept in the house. The other dog? Is in the cellar. By himself. With a water and food bowl, yes, but still. He's down there all day, all night, alone. Peeing and pooping on the floor. Sleeping on the floor. The cold concrete floor. Every time I go downstairs I can hear him dragging his bowl around. I can smell the pee and poop. It's disgusting, but more than that, it's wrong. Wrong, wrong, wrong. Because while I am not a Dog Person, I am an animal person and I believe if you adopt a pet, you need to treat it as a pet, not as something you store in your cellar or in a chain link enclosure outside.

Do I complain to the landlord and have the neighbours become even weirder than they are already? (They have yet to say hello to us, even when we run into them in the drive way. They just look at us and go in the house. Very weird.) Is it considered abuse if he's being fed and given water? He looks healthy - doesn't look matted, doesn't look malnourished - from what I can see thru the slats that divide the cellar. But he must be lonely. And bored, if he's dragging around his water dish.

Why would you have a dog if you aren't going to have it living with you? As nuts as my dog can make me at times, she's still in the house with us, sleeping on her bed or trying to mooch food while I'm making meals, letting the babies crawl on her and giving them sloppy, smelly face washes which they love and I try not to think about. (because, ew, the dog eats her own vomit. And cat shit. And, just ew. Ew, ew, ew.) I would never leave her in the cellar by herself. I hated even leaving her on a run outside for more than a couple of hours at a time. I made a commitment when I adopted my dog and I am not one to go back on that, just because my life is busy.

I feel bad for this dog. I feel bad that he doesn't have an owner who cares for him, even in the half-assed way I care for my dog. I want to go over there and ask if they need another home for the dog, but given their weirdness, I'm a little afraid to do that.

I just know that every time I go into that cellar, my heart aches a little more for that dog. And pretty soon, I'm going to have to do something, because I can't take much more.

I don't understand people like that. They are being cruel to that dog. I hate starting neighbor wars, but I think I'd have to call animal welfare.

You should call animal welfare. The fact that the dog isn't getting light or exercise, combined with the fact that he's living on the premises where he deficates is plenty of evidence of neglect.

I wouldn't care if the neighbors got weirder. You can call in a complaint anonymously. I would.

What about the health of your family...with that poop and pee permeating the air like that? Can we say ewww???
This is a health hazard as well as cruelty to an animal. I'd say something to someone.

It's just wrong, and if you're not squeamish about turning in your neighbors to either a) Animal Services or b) your landlord (which, honestly, may be the way to go - it's his property)

ugh. I agree, someone needs to be called about this.

Oh, that is terrible! Terrible.

That is absolutely neglect and abuse. A og is required to have adequate food, shlter, exercise, water, and a seperate area for defication, not where the poor thing needs to live all day long. Call your local SPCA or Animal Control and the will investigate ASAP. Also as someone else pointed out the fumes that the amonia in the urine can really do damage to your lungs, so they need to take care of that. I would alert the landlord after the SPCA investigates so that they just don't dart and run and stick the dog in some other cellar.

Wow. Tough call. I totally get not wanting to set off weird neighbors, but as others have pointed out, there's two issues here. The first is obviously the dog, which is living a horrible life, but the other is the health code nightmare this is creating. Bad situation any way you slice it.

You really know how to get me mad lady.

Call your local animal welfare office. not the dog officer, unless you have a really good one, but the humane society of your part of the state (I'll find you a phone number if you'd like) and have them get involved. Yes it is abuse. Yes that dog should be taken away. If I wasn't as big as a house I'd do it myself. And then I'd bite them.

I agree with the others, the MSPCA should be called. I'm not a dog person either, but it makes me crazy when people neglect their pets like that.
I can't even imagine the smell of that basement when the weather gets warmer. Good luck, I know this must be difficult.

I'll tell you now that the MSPCA won't do anything.

We called the ASPCA on a neighbor back when we lived in NY because they'd leave their dog outside in 100 degree weather, stormy weather, snowy weather.

They came to investigate, but they said as long as the dog has shelter and food and water, there is nothing they can do. The dog was chained to a dog house that he never went in.

Try it...I hope the Mass branch does something.

I'd definitely get someone involved. Humane Society, or whatever branch you have there in the States, but yeah, that's WRONG.

I've um....re-homed a few dogs in my day. I used to live in a trailer park where people had dogs chained to bumpers.

Imagine the shock and surprise when SIX of them all up and got off their chains one night!

People piss me off.

Ugh, this entry made my heart hurt so badly for that lab. I hope your local animal welfare offices act accordingly . . .